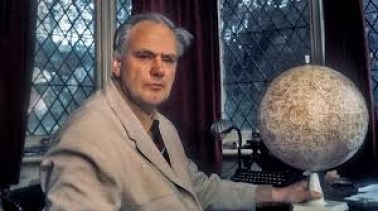 Yesterday was a very sad day for me; one of my personal heroes’s died. Sir Patrick Moore passed away aged 89. Patrick was a national treasure, the embodiment of a world that sadly no longer exists, a better world with old fashioned values such as decency, service and helping others. Patrick stoically refused to be modernised which is why we loved him so much.

With his pipe and monocle, his unkempt appearance, his infectious enthusiasm, and his willingness to send himself up Patrick was always good value.

As a young boy I was captivated by his enthusiasm for astronomy and inspired by his Friday evening spot, seeing stars. I wrote to Patrick several times who always replied promptly to my many queries (I still have the letters and postcards).

I met Patrick on many occasions and always found him to be excellent company, his deep love of astronomy, music and cricket brought forth many anecdotes all of them hilarious: a real story teller.

Best known for his record breaking programme The Sky at Night Patrick was also one of the presenters of the moon landing programmes presented on the BBC. I often wondered what happened to MAUD the lunar bicycle unveiled by Patrick, perhaps future missions to the moon will resurrect this outstanding piece of British invention and initiative.

Patrick was also an accomplished pianist and xylophonist and often performed his own compositions despite having no formal training. Often impersonated on TV with great affection Patrick was a familiar face to all.

My favourite personal memory of Patrick was watching him demonstrate his spin bowling technique by thundering down the reception area of the Shaftsbury Hotel in Liverpool much to the dismay of the Maitre De and the hotel staff.

Thank you Sir Patrick for all the pleasure you have given me over the past 40 years and to the countless others that you have inspired, you will be sadly missed.